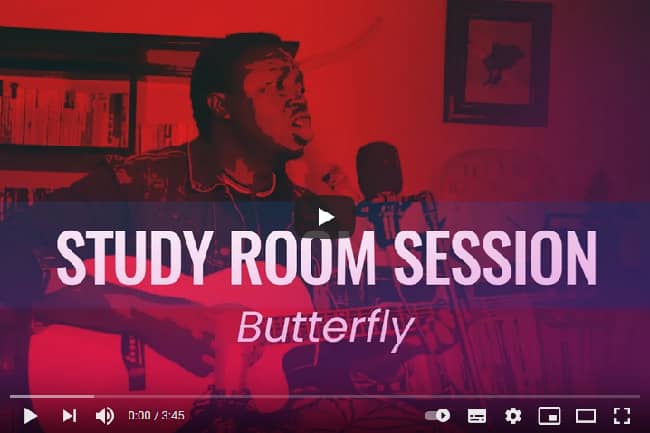 On Friday, 15th January 2021, the Jos-based Nigerian singer-songwriter, Doug Kazé, launched the Study Room Sessions via his YouTube channel with an acoustic performance of his song ‘Butterfly‘. Mr. Kazé revealed that Study Room Sessions will be in form of a series of acoustic videos shot in his personal study space. The idea was inspired by the singer’s use of the small space as for both academic study and creation or rehearsal of his music. This space points to Kazé’s different facets as an academic and artiste and his insistence on their being inseparable.

This combination of academic work and art did not start recently. Kazé shared his memory of how he used to take his guitar to work as a secondary school teacher. He would sometimes play some tunes when he needed a break from work. This continued during his doctoral studies at Rhodes University. His precious Cort classical guitar became both his escape from the sometimes mentally challenging nature of research work and an inspiration to explore sound ideas.

This first video in the series features an acoustic and slower version of Butterfly, a song that addresses familiar struggle with loss and grief and speaks of hope. The song, inspired by a family member’s loss of a little child, began as a poem and ended up as a song. The track has however won the heart of his many fans and one of their favorites from the BRAVE Album.

Doug Kazé plans to release a Study Room Sessions video every month and hopes to feature fellow artistes from his hometown once in a while. This is something to look forward to.

Praiz – To The Moon EP