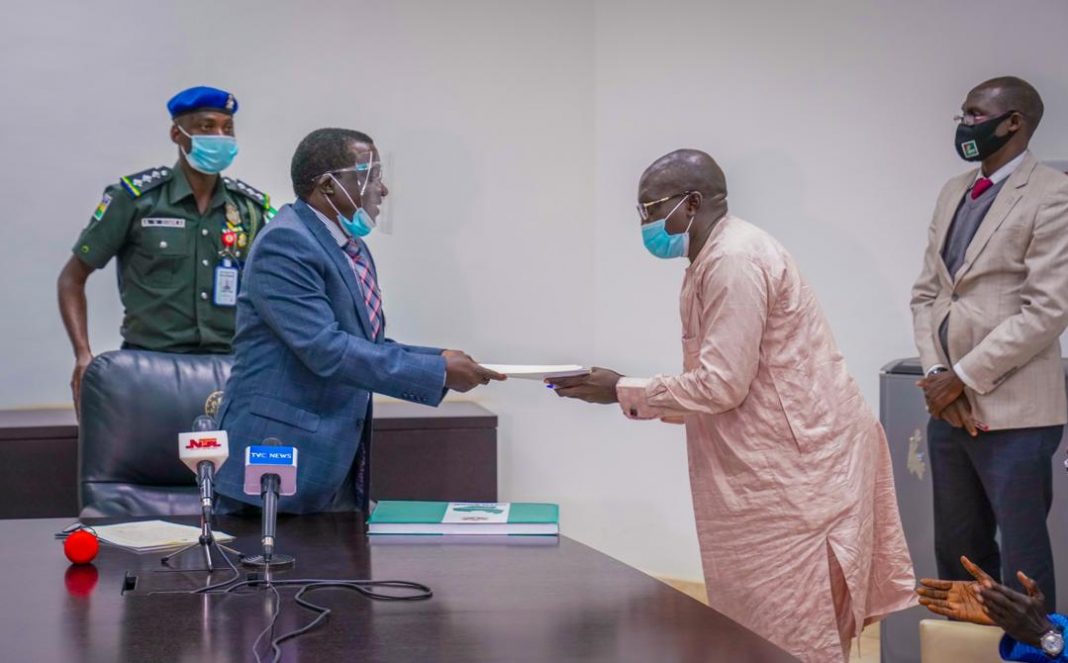 At a brief ceremony at the New Government House Little Rayfield-Jos, Governor Lalong said the event was coming in rather unusual circumstances because of the impeachment of the former Chairman by members of the Legislative Arm who had accused him on various acts of misconduct.
He also recalled that the former Chairman was earlier suspended by the Plateau State House of Assembly.
Given this development and in line with extant laws, he said it became necessary to swear in the former Deputy Chairman, Hon. Abdulmalik Yusuf Haruna so as to ensure that there is no vacuum in the administration of the Local Government.

He charged the new Chairman to live up to the responsibility of running the Local Government and meeting the aspirations of the people.
He said “Remember that you are to serve the people honestly and diligently as the people are yearning for development at the grassroots. You are to hold this office in trust and to deliver good governance to the people of your Local Government with the fear of God”.

Governor Lalong charged the new Chairman to ensure that resources are utilised in line with the realities of Covid 19 where government funds have become scarce. He urged him to ensure prudence and give priority to programmes and projects that have direct impact on the lives of the people.
In a response, the new Chairman Hon. Yusuf Abdulmalik Usman said he considered his swearing in as an act of God, saying he was ready to work with all stakeholders particularly the Management Team and Members of the Legislative Arm as well as the traditional and security institutions.

He said “I will deploy my experience within the Local Government System to mobilise and reconcile all parties that may have been aggrieved because of the developments in the Local Government in recent times. I will also do my best to uplift the standard on living of the people in order to make them feel the impact of Government”.

He appealed to the people of Quan’pan to give him the support needed to work for the peace and prosperity of the Local Government Area.
The new Chairman who was born in 1969 is from Kurgwi in Quan’pan Local Government and has a Bachelors Degree in History from the Nasarawa State University Keffi. He was a Counselor representing Kurgwi West from 2004-2007.